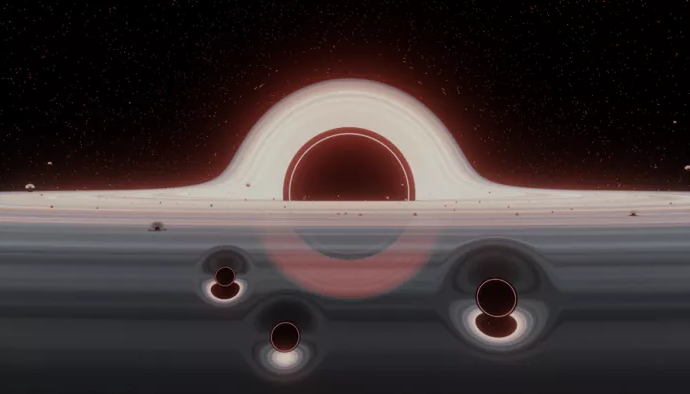 Take three black holes and throw them into the disk surrounding a supermassive black hole and things get really weird, really fast.

That’s the conclusion of new research digging into a particularly strange gravitational wave event that scientists observed in May 2019 and are still trying to understand. Gravitational waves are the ripples in space-time caused by, among other dramatic events, the mergers of black holes. But this particular observation didn’t match other collisions scientists have caught: it resulted in a black hole in the mid-size range that scientists can barely see, much less explain, and some force was stretching the typically circular dance as the behemoths approached each other.

“The gravitational wave event GW190521 is the most surprising discovery to date. The black holes’ masses and spins were already surprising, but even more surprising was that they appeared not to have a circular orbit leading up to the merger,” Imre Bartos, a physicist at the University of Florida and co-author on the new research, said in a statement. (Astronomers name gravitational wave signals with the date they were observed, so GW190521 marks a gravitational wave detected on May 21, 2019.)

In the earliest analysis of the strange signal, scientists had already suspected that the merger occurred in a pocket of space rich with black holes. Astronomers know of two types of black holes. One, dubbed stellar black holes, form from dying stars and contain perhaps a dozen times the mass of our sun. Supermassive black holes, in contrast, hide at the center of some galaxies (including our Milky Way) and can contain millions of times the mass of their puny counterparts.

The result of the May 2019 merger appeared to be an intermediate black hole, a size category that ranges from perhaps 100 to 1,000 times the mass of our sun. Scientists had never yet managed to study and could not explain how such an object might form. In response to the detection, astronomers suggested that one of the colliding black holes was itself the result of a collision, pushing the final product into the mysterious intermediate range at 142 times the mass of the sun.

To get two sequential collisions, the astronomers first analyzing GW190521 proposed that the event occurred near what scientists call an active galactic nucleus — a particularly dynamic supermassive black hole anchoring a galaxy, where smaller black holes might proliferate.

The new research supports that suggestion, approaching the situation from a different angle.

These scientists wanted to understand how it was that the two black holes weren’t actually circling each other as they collided — instead, their orbits were eccentric or elliptical, more ovals than circles. That, too, was strange: Astronomers thought that the massive gravitational forces involved when two black holes are colliding should have forced these two onto circular paths.

So physicists behind the new research set about modeling black hole collisions. And while their calculations suggested that three black holes at random were unlikely to result in an eccentric collision, something changed when they considered the environment of an active galactic nucleus.

This type of feature also hosts a disk of matter surrounding the supermassive black hole, like a much more massive model of the solar system. Where the solar system has planets, an active galactic nucleus has stellar black holes scattered throughout the disk in what the new research identifies as essentially a two-dimensional system.

Under those conditions, the probability of an eccentric merger in the models shot up — as much as 100 times, co-author Johan Samsing, an astrophysicist at the Niels Bohr Institute in Denmark, said in the statement. At that rate, perhaps half of mergers in the disks of active galactic nuclei would be eccentric rather than circular, making the exceptional observation of May 2019 much less surprising.

“In these environments, the typical velocity and density of black holes is so high that smaller black holes bounce around as in a giant game of billiards and wide circular binaries cannot exist,” co-author Bence Kocsis, an astrophysicist at the University of Oxford in the United Kingdom said in the statement.

The researchers noted that the probability of eccentric mergers in their model varies with characteristics of the disk surrounding the supermassive black hole. Next up, they said, is spotting ever more black hole collisions to analyze.

The research is described in a paper published Wednesday (March 9) in the journal Nature.